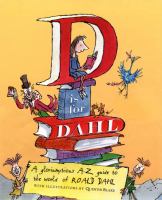 D is for Dahl : a gloriumptious A-Z guide to the world of Roald Dahl

Collection of odd facts and anecdotes about author, Roald Dahl, and his literary creations. Full description