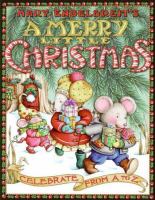 Mary Engelbreit's A merry little Christmas : celebrate from A to Z.

In this rhyming alphabet book, a mouse family celebrates all the wonderful things about Christmas in their new woodland home. Full description