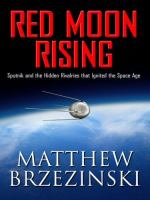 The behind-the-scenes story of the fierce battles on earth that launched the superpowers into space. Khrushchev was frustrated at America's U-2 spy plane, which flew too high to be shot down. But Russia's chief rocket designer, had an answer: an artificial satellite that would orbit the earth and cr... Full description