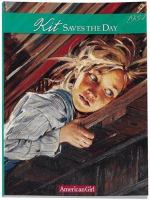 Tired of doing chores and longing for adventure during the Great Depression, Kit meets a hobo and decides to hop a freight train. Full description