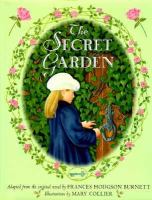 In this abridged adaptation of the classic novel, a lonely orphan discovers the wonders of a mysterious garden and befriends her invalid cousin. Full description