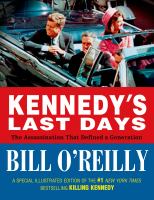 Kennedy's last days : the assassination that defined a generation

A historical narrative of the events surrounding the death of the 35th president is set against the backdrop of an escalating Cold War and describes the many political challenges Kennedy was facing before his assassination, in an account that also describes Lee Harvey Oswald's story and the events s... Full description