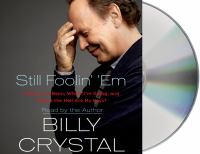 Hilarious and heartfelt observations on aging from one of America's biggest movie stars as he turns 65, and a look back at a remarkable career. Full description