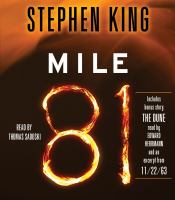 Young Pete Simmons just wanted to have some fun and explore when he stumbled onto the old abandoned rest stop at Mile 81 on the Maine turnpike. Instead, he discovers a scene of bloodshed and carnage. A car has pulled into the boarded-up service station, a run-down, muddy station wagon without any pl... Full description