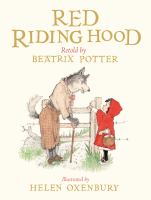 Based on Charles Perrault's version of the tale, a little girl meets a hungry wolf in the forest while on her way to visit her grandmother. Full description