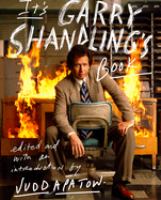 "Garry Shandling was a singular trailblazer in the comedy world. His two hit shows, It's Garry Shandling's Show and The Larry Sanders Show, broke new ground and influenced future sitcoms like 30 Rock and Curb Your Enthusiasm, and his stand-up laid the foundation for a whole generation of comics. The... Full description