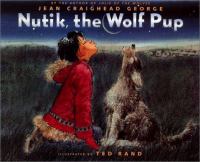 When his older sister Julie brings home two small wolf pups, Amaroq takes care of the one called Nutik and grows to love it, even though Julie tells him it cannot stay. Full description