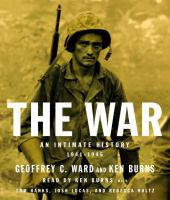 Chronicles the American experience of World War II, both on the battlefields and on the home front, as chronicled in the voices and experiences of ordinary men and women from four towns across the country, from 1941 to 1945. Full description