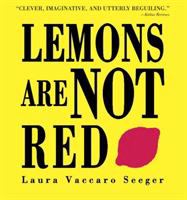 Lemons are not red

A simple story highlights such things as a yellow lemon, a pink flamingo, and a silver moon in a visual game in which die-cut shapes fall on the correct color backgrounds. Full description