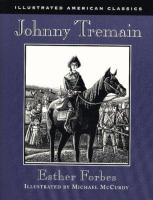 After injuring his hand, a silversmith's apprentice in Boston becomes a messenger for the Sons of Liberty in the days before the American Revolution. Full description