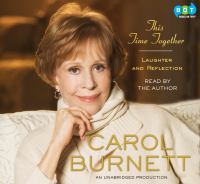 This time together : [laughter and reflection]

In engaging anecdotes, Carol discusses her remarkable friendships with stars such at Jimmy Stewart, Lucille Ball, Cary Grant, and Julie Andrews; her television show that won twenty-five Emmys in its remarkable eleven-year run; and the sorrows that she overcame with her irresistible humor. Full description