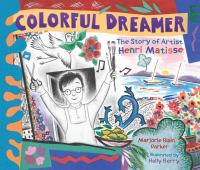 Presents the life and work of the turn-of-the-twentieth-century French artist Henri Matisse, imagining his art-inspired childhood and growth into becoming one of the most admired artists in the world. Full description