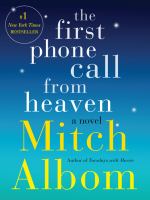 The first phone call from heaven

The story of a small town on Lake Michigan that gets worldwide attention when its citizens start receiving phone calls from the afterlife. Is it the greatest miracle ever or a massive hoax? Sully Harding, a grief-stricken single father, is determined to find out. Full description

Our building is currently open for pick-up of materials, 45 minute computer sessions, and browsing of materials.