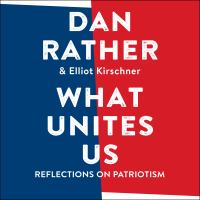 What unites us : reflections on patriotism

In a collection of original essays, the venerated television journalist, Dan Rather, celebrates shared values and what matters most in this great country, and shows what patriotism looks like. Writing about the institutions that sustain the people, such as public libraries, public schools, and natio... Full description