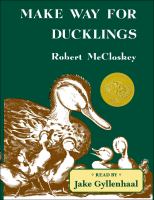 Mrs. Mallard was sure that the pond in the Boston Public Gardens would be a perfect place for her and her eight ducklings to live. The problem was how to get them there through the busy streets of Boston. But with a little help from the Boston police, Mrs. Mallard and Jack, Kack, Lack, Nack, Ouack,... Full description